Long time readers may recall that early in 2011 my Brother 950i died in a puff of smoke and burning plastic odour when I tried to turn it on.  After an appeal on, I think, Yahoo, I was kindly sent some instructions for repairing the machine by the MK Guild help line.

Apparently this is a relatively common problem with ageing electronic machines, and can be traced to the capacitors in the power supply which have become too elderly and subsequently burn out / give up.

The fix is to remove the end of the knitting machine where the power supply plugs in, fish out the circuit board, and replace the two problem capacitors. As this involves soldering, I had been procrastinating for about a year and a half.

But today, making use of the free time I now have due to being unemployed, I brought the machine inside to the kitchen table and had at it.  I was partly reassured by looking at all the pictures on this page where you will find friendly instructions on how to repair a KH930 knitting machine.  That's a different machine, but the process is very similar. 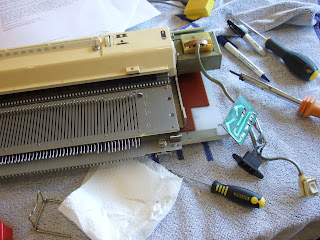 I took a picture of the circuit board before doing anything to it, so I could remember which capacitor went where.  This isn't that picture because the circuit board is upside down in this picture.  The black bit is the power plug, and the switch hanging loose is the machine's power switch. 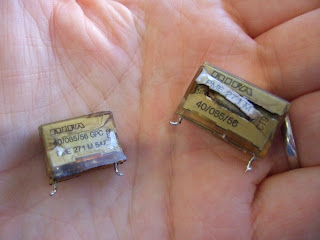 I could then see my two capacitors, both of which had indeed cracked open.  I used a soldering iron to free them from the circuit board, levering gently with a screwdriver until the melting solder released them. 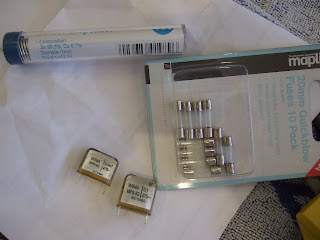 The instructions I had been sent specified purchasing two replacement capacitors:  X2 275v 0.1uf, and X2 275v 0.047uf.  These matched the old ones I removed, apart from the old ones were labeled 250v. I also replaced the fuse which was a 0.5A.  I took the old components with me to an electronics store called Maplins.  I was able to purchase two replacement 275w capacitors (they didn't have 250w except in two incorrect sizes), a tube of solder, and a packet of 10 fuses for just over £8. 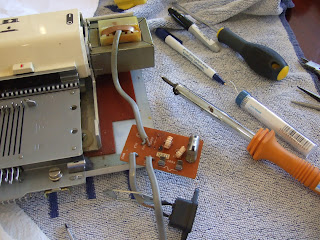 The only issue I ran into was that my .1uf capacitor had legs that weren't wide enough for either of the two possible sets of holes on its place on the board.  By bending the legs outwards, I got it into the narrower set of holes at a slight angle.  This meant that when I replaced the circuit board, I could only slide it into the plastic holding groove on one side but not both sides, due to the capacitor sticking up higher.  The board was still wedged in fairly tightly so I don't think it will be an issue, hopefully. 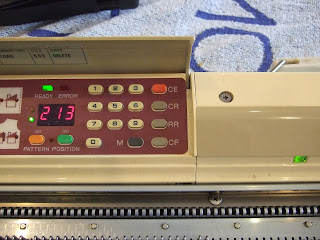 After soldering the new capacitors in place with the recommended 'volcano' shapes pictured on the 930 web page, I screwed it all back together and holding my breath, turned on the power.  And it worked!!  And no smoke!

Now I just have to relearn how to use the electronic machine after using the punchcard for so long.

Perhaps I can add 'knitting machine mechanic' to my CV?

Go you.
I blew the capacitor in my sewing machine recently but had it fixed by the repair centre. Didn't even consider trying it myself.

Great job! I am on the job market again myself. I have an interview Thursday and am very hopeful as it is a permanent position and they recruited me. Will keep you posted.

Much love to you. Good luck with your job search.

Wow!! I can only barely handle the manual variety. I would be very nervous to tackle this job but I would probably have a go.
So great that it has paid off for you.
Cheers
Lush

Successfully sourced and replaced both capacitors on my 950i today. Operation went smoothly and machine now back up and running... Many thanks to people like you, who take the time to post such information online!

Thanks for making this job easy for me. It literally took me 10 mins to replace one blown capacitor and put everything back again. Easy peasy lemon squeezy.

Thank you so much for posting this my husband is going to have a go fixing my machine. I couldn't afford to spend a lot of money sending it away for repair so was really happy to see this I have MS and really look forward to knitting when I can thank you so much

just brought a brother 950i turned it on and the next minute smoke was pouring out
thank you so much for explaining what's wrong and for your easy to follow instruction. its people like you that makes the internet worth while

Hi and thank you for bothering to post these great instructions!

I had the same experience yesterday - plugged in, turned on and all was well for about 5 minutes, then there was a sizzle, an awful smell like burnt toffee and the machine died.

I followed these instructions together with the others for the 930 mentioned here and found that one of the capacitors had split. The other is intact, but with hairline cracks on the casing, so I don't think that would have been far behind. The fuse was also blown.

I got the new caps from Maplins but be advised that they don't look the same as the old ones any more, even though the pictures in the Maplins catalogue do. The caps I got are smaller in physical size and grey in colour. The larger capacity one fits the smaller width two holes perfectly (there are 3 holes available for that one), but the smaller one is a bit of a stretch.

Anyway, done, dusted and working! There's at least one very happy bunny in the UK today :-). Thank you again.

In 2018 your page is still used.Thank you so much for a really clear explanation of "how to do it" I learned how to use a soldering iron along the way ! now I need to find out how to free the pesky MC button and then I'll be cooking with gas.I shouldn't have left it for so long before using my machine again.

THANK YOU FOR YOU TUTORIAL, I WISH I HAD FOUND IT B 4 I PAID £150 TO HAVE MINE REPAIRED. THIS IS STILL USEFUL INFORMATION IN 2021. THANK YOU AGAIN

Saving the economy one yard (and skein) at a time